Sometimes I really don’t know where to go next. I’d love to just spill my guts all over the internet. As you may know from my last couple of posts, I’m closely following the work of AJ Leon and Misfit, Inc, especially ever since I was selected as one of the conference participants for the Fargo conference. 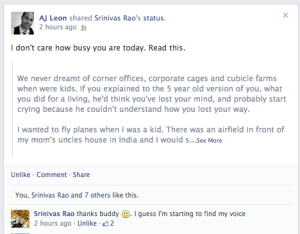 “We leave out the raw footage, and only show our highlight reels. We present these perfectly manicured versions of our lives, airbrushed, edited, and socially approved. We let people see the wrapping paper without looking inside the package. When you take off the wrapping paper, and expose the raw footage for what it is is, what’s revealed is the imperfect, tarnished, broken version of who you are. That’s the real YOU. I’ve always admired James Altucher’s writing because he doesn’t leave out the dark parts. It takes courage not to leave out the dark parts. But I haven’t found it yet. I still leave them out….I left them out today (even though I wrote them)” –Srinivas Rao

Because of that, I spent an hour or so hopping around James Altucher’s site this afternoon, and he’s set my mind to spinning:

He followed me back! I know I am a total social media sap but just for your information: following the Jackie back on the Twitters makes for a happy Jackie. @jackinessity. Say hello, too.

I wish I were as good a writer as James Altucher, or as Joshua Millburn, or AJ Leon. But last time I checked, I was still me, so I’m just going to have to keep plugging away.

Truthfully, I don’t have much of a point to this one.

Or, tell me something special now: Cancel reply